If you are on a gluten-free diet, then you might be wondering Is sushi gluten free?

A prevalent misconception amongst people is that a gluten-free diet is healthier than a gluten-containing diet.

This is not the case; both can be beneficial. But if you’re allergic to the gluten protein, then you might have a problem choosing and selecting the right food option for you.

There are various gluten-free grains and cereals which can be included in the diet, and lots of gluten-free dishes are also widely consumed.

Sushi is also one of the dishes that creates a dilemma for consumers: “is sushi gluten free? Or does sushi contain gluten? Here we’ll help you out to overcome this dilemma. Just keep reading and learning.

What Is Sushi And Its Ingredients?

Sushi is a Japanese dish made with vinegared rice with a variety of seafood, veggies, and even fruits. It’s usually accompanied by soy sauce, wasabi, and ginger.

Sushi comes in so many kinds and preparation methods that whether or not it is gluten-free is dependent on a number of factors.

Although you may identify the phrase sushi with raw fish, the rice is the most significant component. The sour flavor of the vinegared rice is indeed what the word “sushi” refers to. Sushi always includes rice, regardless of the toppings or contents.

Let’s have a quick look at how sushi is made. What ingredients are used to make sushi? Traditional sushi uses raw fish, but not all sushi is created using raw fish.

Sushi with just vegetables (cucumber, avocado, or even sweet potato) or even grilled, fried shrimp or other seafood is now available (generally called tempura rolls).

You can truly put whatever you want in it if you create it yourself.

Sushi is sometimes mistakenly thought to be raw fish, but it is actually vinegar rice mixed with various ingredients, which can contain cooked or raw fish depending on the variety.

Most forms of sushi do not require the addition of raw fish.

Gluten is a protein that can be found in wheat, rye, barley, and triticale, among other grains.

People who follow a gluten-free diet may wonder in their mind: is sushi gluten free? I am unsure if sushi is safe to eat.

However, sushi comes in a wide range of flavors, some of which contain ingredients that are incompatible with a gluten-free diet.

Although sushi cannot be labelled as completely gluten-free due to the variety of ingredients and ways it can be served, it is still feasible to enjoy sushi on a gluten-free diet.

But nowadays, to enhance its taste and flavor, more ingredients are added, which makes sushi both gluten-free and non-gluten-free.

Sushi made up of traditional methods and ingredients without any modification is considered to be gluten free.

How Do You Know If Sushi Is Gluten Free?

By checking the ingredient list, one can know whether sushi is gluten free or not.

If it only contains rice, sea foods, and without sauces and extra ingredients, then it is considered to be gluten free.

On the other hand, if sushi is coated with contaminated soy sauce, wheat powder, sesame seed, and some other binders, then the sushi is not considered gluten free.

So before incorporating any kind of sushi, do not forget to check the ingredient list.

It’s usually made with medium-or short-grain white rice, although it can also be made with brown rice.

Although most of these ingredients are gluten-free, some vinegars, such as non-distilled or malt, do contain gluten.

The sushi rice will include gluten if the vinegar used is wheat-based.

When distilled white vinegar is used, some gluten-free people may have an allergic reaction to it because it is derived from gluten-containing grains.

When dining, always keep in mind that before ordering any sushi with rice, inquire about the vinegar used.

If you’re suffering from celiac disease, then seaweed is your go-to option only if consumed or cooked without any addition of gluten-containing ingredients .

Sometimes seaweed is tossed with different sauces that have the essence of wheat or gluten, which turns the seaweed not gluten free.

Moreover, Wegmans sushi has no artificial colors, preservatives, or flavors and it is gluten free.

Sashimi sushi is basically made up of seafood and served without any other ingredients.

King crab sashimi sushi is made up of king crab, nori, vegetables, marinated gluten-free sauces ,fish, seaweed, and tuna. It tastes wonderful and is full of nutrition.

Publix sushi is low in calories and available in both varieties that are gluten free and non-gluten free.

It is considered to be gluten-free unless gluten-specific sauces or vinegars are used for preparation.

The ingredients generally required for the preparation of sushi are water , rice , vinegar , salt, and sugar. All the above-mentioned ingredients are gluten free.

But it depends upon the type of vinegar used during preparation whether the vinegar is gluten-free or not.

Malted and non-distilled vinegars contain gluten. Some vinegars are also contaminated with wheat extract, which is considered to be non-gluten free.

On the other hand, rice vinegar is gluten free.

Whole food sushi has various gluten free varieties like avocado rolls, wasabi , ginger, and salmon sushi, whereas if gluten-containing sauces are used during packaging or preparing, it is not gluten free.

Ginger is a very common condiment used in sushi. Pickling, roasting, frying, or boiling can all be used to incorporate it into sushi.

Ginger is gluten free, but sometimes to enhance the taste of sushi, ginger is fermented and served with different sauces that have the essence of gluten, which makes ginger sushi non-gluten free.

No, because the batter of tempura is made of wheat flour, which makes it unfit for individuals who have celiac disease.

A gluten-allergic individual can not enjoy this delicious dish. 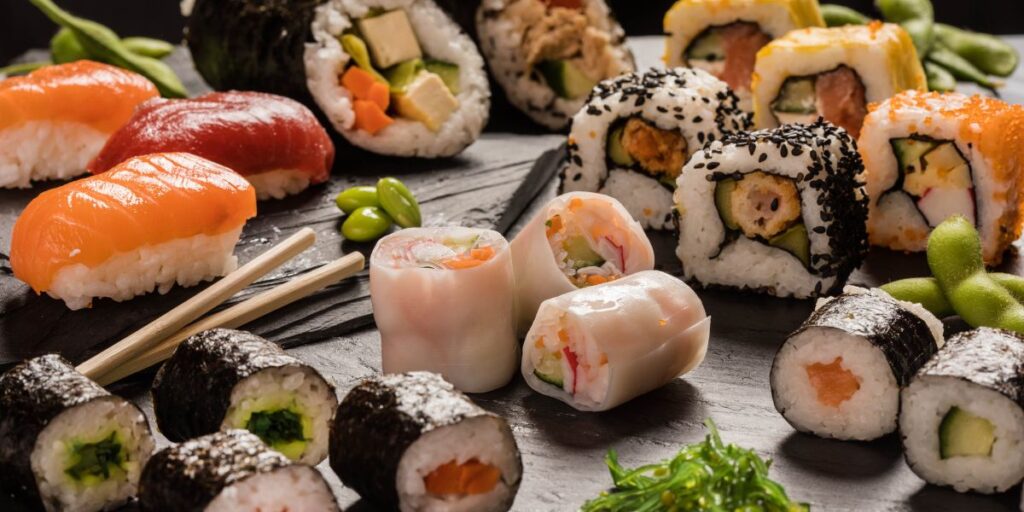 Step 1: Taking the bamboo sushi mat, place some filling in the center of the rice in a straight manner.

Step 2:-Roll the mat, keeping on checking that ingredients are not coming out. The ingredients must stick with each other.

Step 3:-Hold it tightly and press the roll gently.

Step 5:-Use a sharp knife and cut the roll into small slices

Step 6:-To make it more tempting and tasty, serve it with sauce or enjoy it without sauce.

I hope this article has answered all of your sushi-related questions. Is sushi gluten free? What are its ingredients?

Sushi is a good option for celiac only when consumed without any gluten extract or gluten-containing ingredients.

If you are consuming ready-to-eat or packed sushi, then please check the ingredient table.

When ordering in a restaurant, always ask whether the vinegar used in it is gluten free or not. Sashimi, nigiri, uramaki, and wasabi are gluten-free sushi options, whereas tempura and temaki are non-gluten-free sushi.