Are you also wondering, “Is soy sauce gluten free? In this article we’ll let you know everything about soy sauce, including the gluten content in it and many more.

If you’re trying to avoid gluten, keep in mind that soy sauce that isn’t labeled gluten-free frequently contains wheat. It may contain barley in some countries outside of the United States.

Gluten can be found in regular soy sauce. Many new gluten-free dieters are surprised to know that soy sauce contains wheat.

Always check the ingredients label before purchasing and ingesting anything.

Can You Eat Soya Sauce With Celiac Disease?

As most soy sauces contain gluten, people with celiac disease cannot consume soy sauce due to gluten intolerance or sensitivity.

Wheat is a common ingredient in the majority of brands. However, there is a type of soy sauce known as tamari that is typically made without the use of wheat.

Why Is soy Sauce Not Gluten Free?

The term “soy sauce” is a little misleading because it is traditionally made with wheat and soy. As a result, the question “is soy sauce gluten free?” is frequently raised.

The sauce is traditionally made by combining soy and crushed wheat and fermenting them for several days in a salty brine containing mould cultures.

As a result, the majority of soy sauces contain gluten derived from wheat. Soy sauce made the traditional way is gluten free.

However, wheat and wheat extract are added nowadays to soy sauce to enhance its flavor, making it a non-gluten-free product.

Soy sauce, despite its name, is not always made entirely of soy. Instead, most soy sauces are produced using wheat, soybeans, salt, and water, implying that they contain gluten.

Some soy sauces, on the other hand, are gluten-free, so you can eat them even if you’re gluten-free. If you must follow a gluten-free diet, read the label on the bottle carefully before smothering your meal in soy sauce.

Knowing the differences between the various types of soy sauce on the market will get you the answer to the question: is soy sauce gluten free? It will also help you identify possible gluten-free soy sauces.

Here’s a quick rundown of the four primary types of soy sauce you’ll find in the supermarket:

In ancient China, soy sauce was first made by pressing fermented soybeans into a pure bean sauce. The sauce was used to preserve and enhance the flavors of meals while they were cooking.

Despite the fact that Chinese soy sauce now contains wheat as well as soybeans, it remains the most popular cooking sauce in Chinese cuisine.

Chinese soy sauce is often light, thin, and salty. You can assume that when a Chinese recipe calls for soy sauce, it implies light soy sauce.

You might also use a double-fermented light soy sauce to add a mellower tone and a more complex taste to the dish.

Chinese soy sauce also comes in dark and double dark variants, which are darker in color and thicker in texture.

To add some more color and taste to a dish, add some dark soy sauce in the last few minutes of cooking.

Japanese-style soy sauces are referred to as shoyu. It’s usually a form of soy sauce called koikuchi, which is produced using both soybeans and wheat for a more fragrant flavor.

Japanese soy sauce can be light or dark, and the darker variety is usually used more often than the lighter version.

You can use light Japanese soy sauce instead of dark, but because light soy sauce has a stronger flavor, you may want to reduce the amount.

Shiro is a Japanese word that means “white,” and its color is even lighter than usukuchi. It has a richer flavor and a distinct scent thanks to the addition of additional wheat and a tiny amount of soybeans.

Light Japanese-style soy sauce is popular for flavoring dishes without darkening the color of the components.

Tamari is the Japanese word for soy sauce. Tamari is made with 100% soybeans or only very minute amounts of wheat, unlike shoyu (Koikuchi soy sauce), which is normally brewed with nearly equal parts of soybeans and wheat.

Tamari is a dark crimson paste made from cooked and fermented soybeans that was discovered during the miso production process.

Tamari is a protein-rich liquid that forms as miso matures.

Due to its increased soybean content, Tamari has a richer flavor than other soy sauces. When cooked, it also preserves its flavor.

Tamari’s rich, well-rounded flavor makes it a superb dipping sauce as well as a delicious accent to any food.

Tamari can be used in a variety of dishes, including stir-fries, teriyaki, and soups.

HVP (hydrolyzed vegetable protein) sauce is manufactured by breaking down soy protein and blending it with other flavorings to make a product that looks like soy sauce.

Soy protein is hydrolyzed — or broken down — into amino acids, then combined with sugars, salt, coloring additives such as corn syrup and caramel, water, and chemicals to neutralize the mixture.

While artificial soy sauces can be used for cooking and dipping, we recommend sticking with authentic fermented soy sauces.

Also, HVP soy sauce may contain a variety of added preservatives, so read the label carefully.

How To Choose Gluten-free Soya Sauce?

Most soy sauces contain wheat, which means they contain gluten, as you may have seen while reading through the many types of soy sauce.

Gluten traces are naturally present in soy sauces prepared from soybeans and crushed wheat. Check to see if a soy sauce’s packaging says gluten-free to make sure you’re completely gluten-free.

You can also check the ingredients list to see if the soy sauce contains gluten-containing grains. Even if a soy sauce claims to be gluten-free, you should double-check the contents to be sure.

A gluten-free variant of Kikkoman Naturally Brewed Soy Sauce is also available. Because it’s no less flexible and delicious than the original, Naturally Brewed Tamari Gluten-free Soy Sauce can be used in any recipe as a substitution for our other sauces. As per its ingredient list, it has rice ,soy, and  salt, which makes it gluten free.

This soy sauce is a typical Asian flavor essential that’s perfect for quick and easy cooking. It works well in a range of dishes, from marinades to typical Asian stir-fries.

This 10-ounce bottle of La Choy Teriyaki Sauce and Marinade, made with high-quality, authentic Asian ingredients and spices, has 50 calories per 1 tbsp. and is gluten free as always.

Tamari is a gluten-free Japanese soy sauce prepared from fermented soybeans. It’s darker, less salty, and has a more pronounced umami flavor than most soy sauces.

[Umami] refers to the distinct flavor of three amino acids found in plant and animal proteins and is a Japanese phrase for “pleasing savory taste.”

Using koji and moromi, these ingredients are fermented for several months. Finally, the mixture is squeezed to extract the liquid, resulting in a gluten-free product.

It has allergen information on its packaging. It has lactic acid, soy, salt, caramel , water, and potassium sorbate. 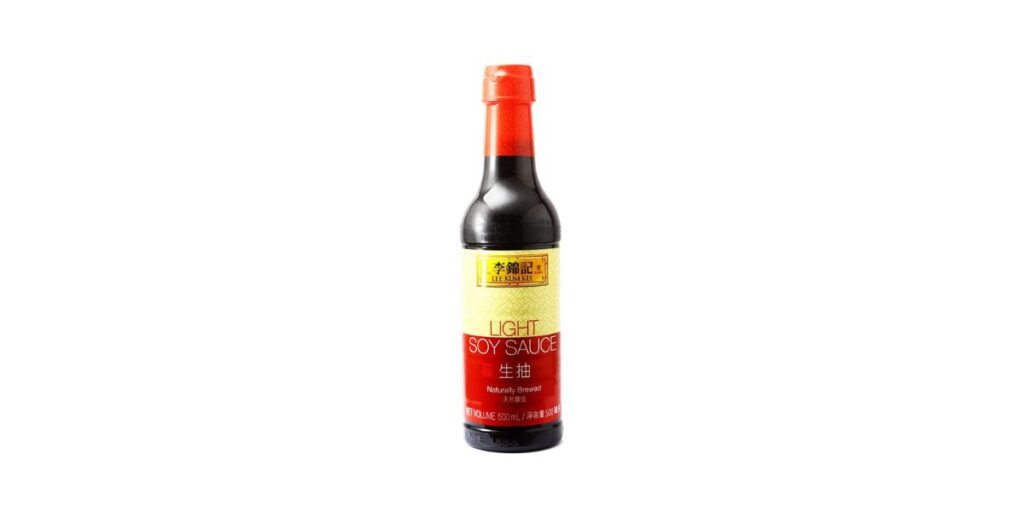 Light soy sauce comes in two varieties: one is gluten free, and the other one is not gluten free with added preservatives. 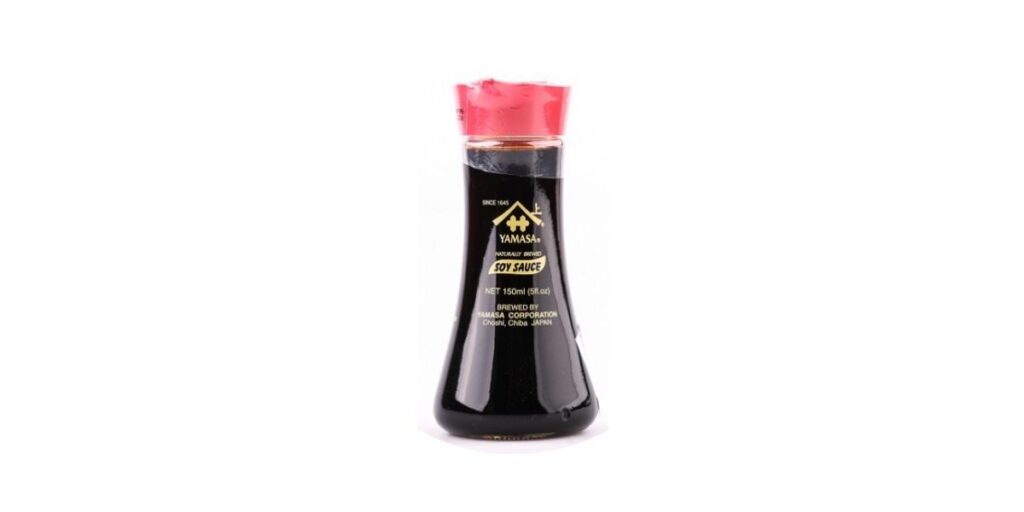 This is one of the purest forms of soy sauce with a rich umami flavor and it is gluten free. It can be consumed by an individual who’s suffering from a gluten allergy. 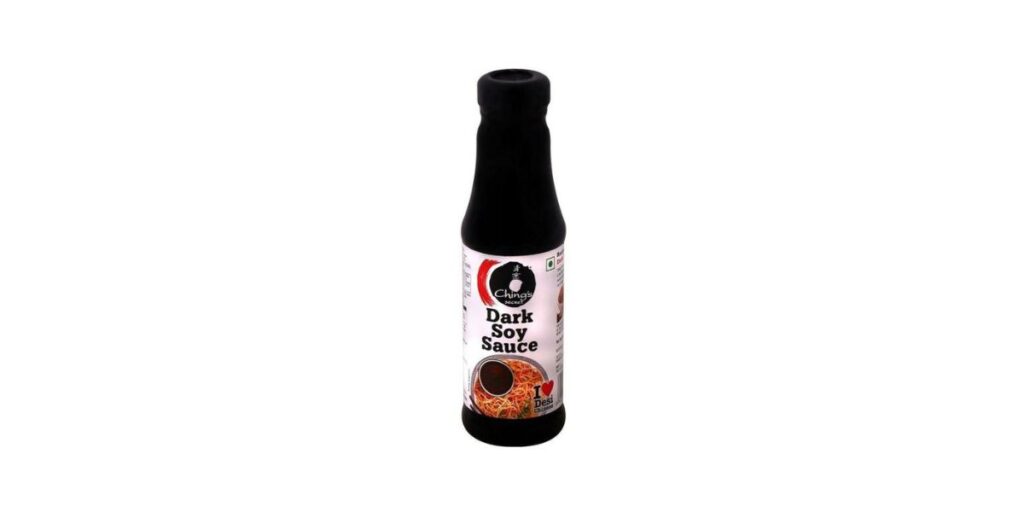 Traditionally, the sauce is created by blending soy and crushed wheat and fermenting them for several days in a salty brine containing mould cultures.

As a result, most soy sauces include gluten derived from wheat. So always check the ingredient list before consuming or buying, because most of the sauces are available in two varieties: gluten-free and non-gluten-free.

What Is A Gluten-Free Substitute For Soy Sauce?

Finding a gluten-free soy sauce substitute that has the same flavor profile and adds the same level of complexity to a dish can be difficult.

It is prepared by fermenting coconut blossom nectar and combining it with sea salt. Coconut aminos are thinner and sweeter than standard soy sauces, despite their similarity to soy sauce.

Another gluten-free soy sauce alternative is liquid aminos. Liquid aminos is a non-fermented liquid protein concentrate made from soybeans.

Overall, liquid amino have a stronger flavor than soy sauce, with a Smokey undertone. To add an additional layer of flavor to dishes and brighten up a meal, use liquid aminos in the same way you would normal soy sauce.

3. Fish Sauce: Fish sauce is produced by fermenting fish or krill in salt for several years. This long fermentation method generates a gluten-free sauce with a savory umami flavor akin to soy sauce but with a hint of fishiness.

Because fish sauce has a fishy flavor and contains more sodium than soy sauce, you should take caution when substituting it for soy sauce in equal amounts.

So, coming to the conclusion that “is soy sauce gluten free?” Then the answer is that the majority of soy sauce variants do not contain gluten. Tamari soy sauce, on the other hand, is typically prepared without wheat and is thus gluten-free.

The same can be said for rice-based soy sauces. According to the FDA, naturally fermented soy sauce (shoyu) contains less than 5 PPM.

In 16 ounces of shoyu, there would only be 10 mg of gluten at 20 PPM. Coconut aminos are also a gluten-free soy sauce substitute with a similar flavor. You don’t have to miss out on soy sauce’s characteristic umami flavor with these gluten-free options.