Weight gain can be beneficial in a variety of situations, from elderly people who have unintentionally lost weight to athletes who want to improve their performance.

No matter why you want to gain weight, it might be difficult to continuously consume more calories than you require, either due to weak appetites or hectic schedules. Losing weight is challenging, but so is gaining weight. 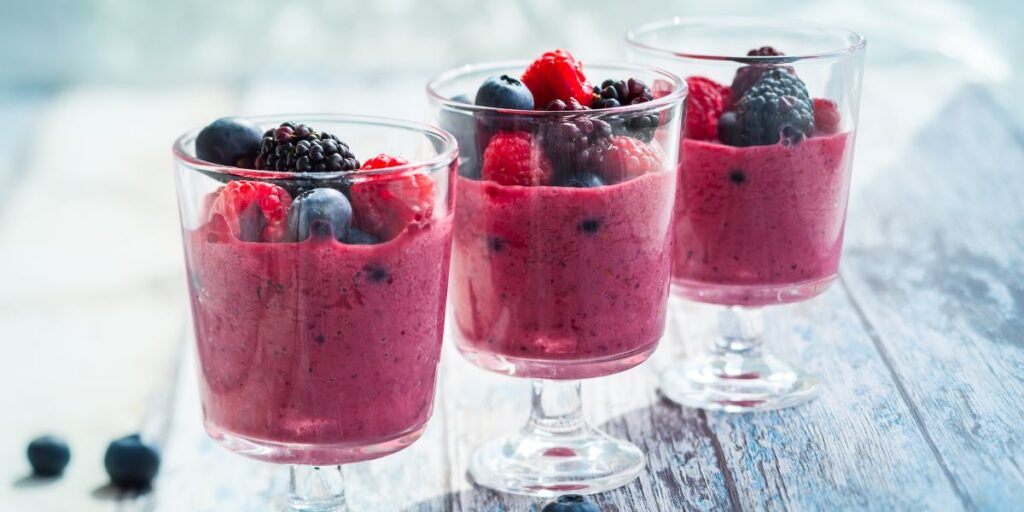 This whole milk-berry smoothie has approximately 1000 calories, making it the second-highest calorie smoothie on our list of weight gain smoothies.

This berry-walnut banana berry smoothie only contains a handful of ingredients, but despite this, it contains a lot of carbohydrates, a good amount of fat, and a fair amount of protein, which is fantastic given that this high calorie smoothie is made without the use of protein powder or any other high-protein ingredients. 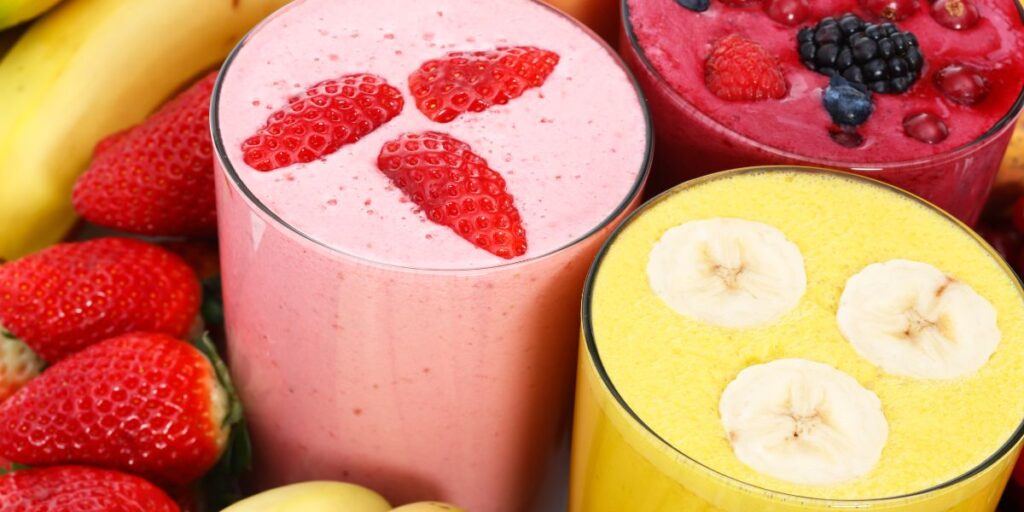 This drink recipe is third on our list of smoothies for weight gain, which is not surprising that it has high levels of all three macronutrients. This dairy-free smoothie’s liquid base is almond milk.

It is also one of the options as protein smoothies as it contains protein powder and has a good amount of total protein in it. It is one of the most preferred fruit weight gain smoothies. 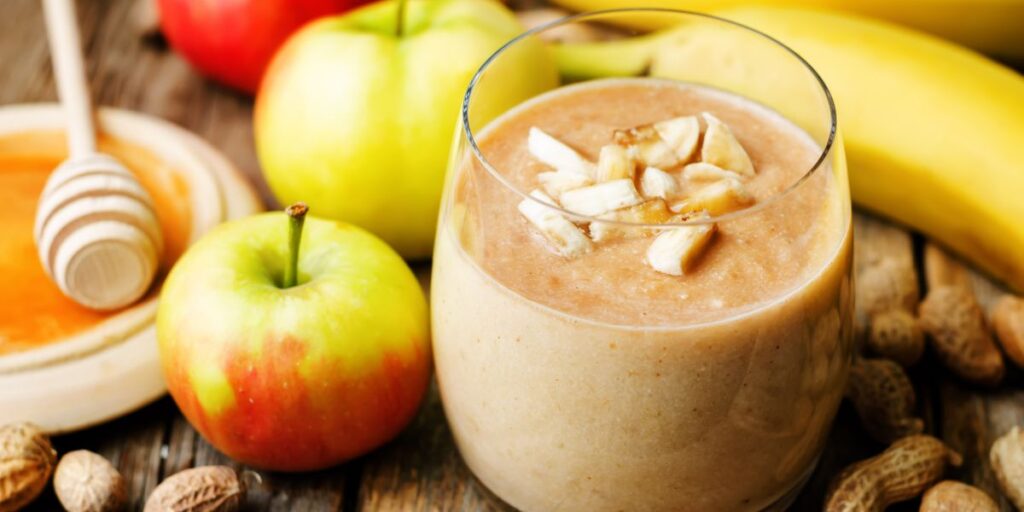 Here, ABC stands for apple, banana, and chia seeds. Due to its high carbohydrate content, the Apple Banana Chia Smoothie is one of the smoothies with the most calories.

A substantial amount of protein and fat are also present in this beverage. Oats, protein powder, and whole milk make up the majority of the protein in the Apple Banana Chia Smoothie.

Whole milk also contributes a sizable percentage of the smoothie’s fat. The smoothie recipe developed to help people gain weight has a treasure trove of carbohydrates thanks to the addition of apples, bananas, and oats. 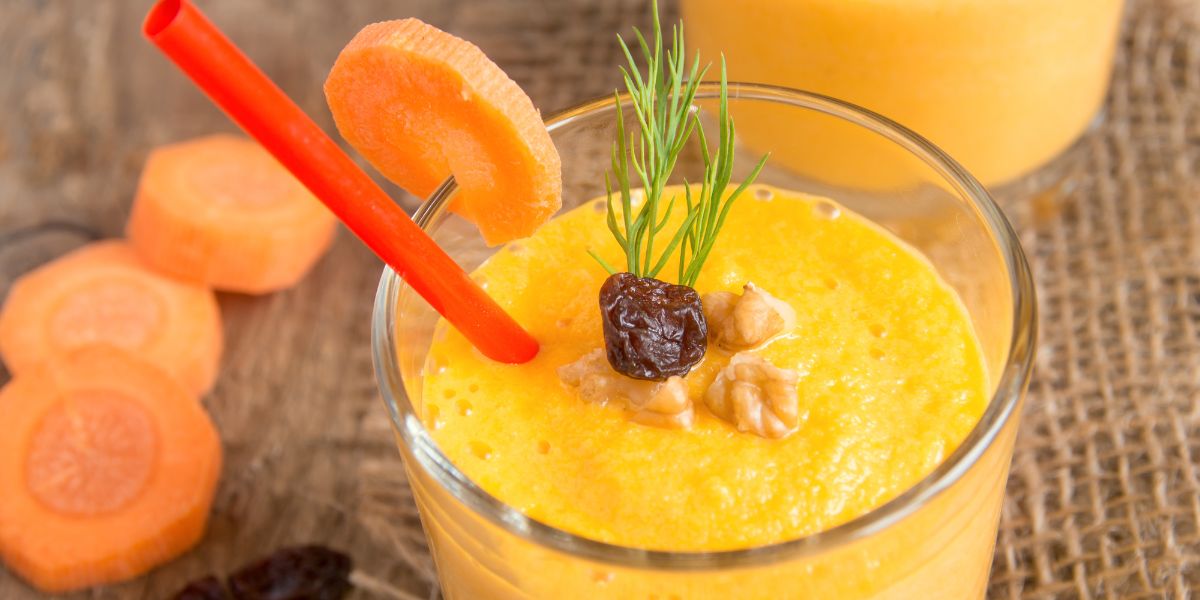 This mango carrot weight gain smoothie smoothie is the high-calorie smoothie with the second-highest protein content. Additionally, this beverage is high in fat and carbohydrates.

The smoothie’s liquid foundation and primary source of fat is almond milk, which is thickened by coconut oil and full-fat Greek yoghurt.

Mangoes, bananas, and carrots from the tropics make up the majority of the carbohydrates. The Greek yoghurt and protein powder increase the smoothie’s protein content. 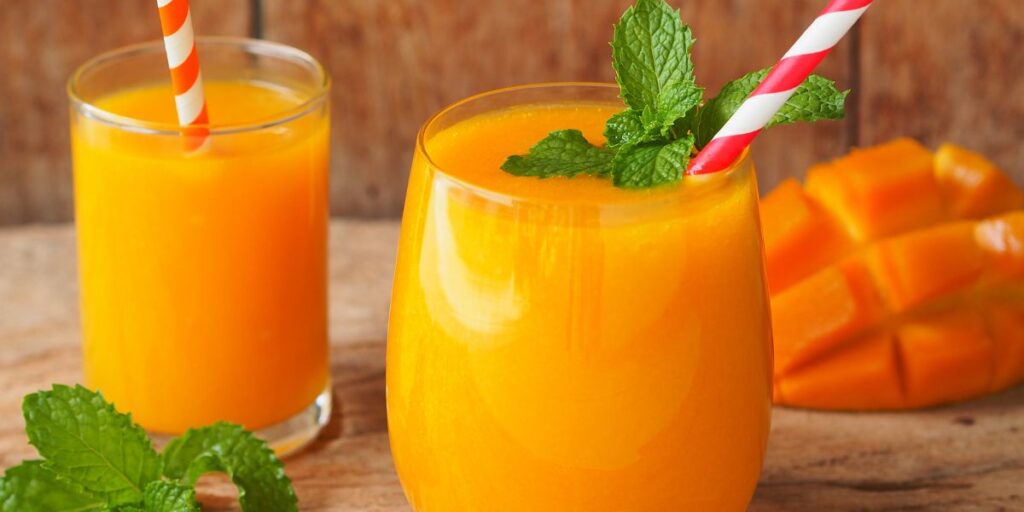 This high calorie weight gain smoothie is very popular among those who want to gain weight. The numerous exotic fruits that make up the mango coconut smoothie give it a treasure of carbohydrates, which contribute to its high calorie content.

Together, rice milk and almond butter give the vegan smoothie its thick viscosity and make up the majority of the beverage’s overall fat content. The kale leaves complete the composition of this vitamin-rich weight-gain smoothie. 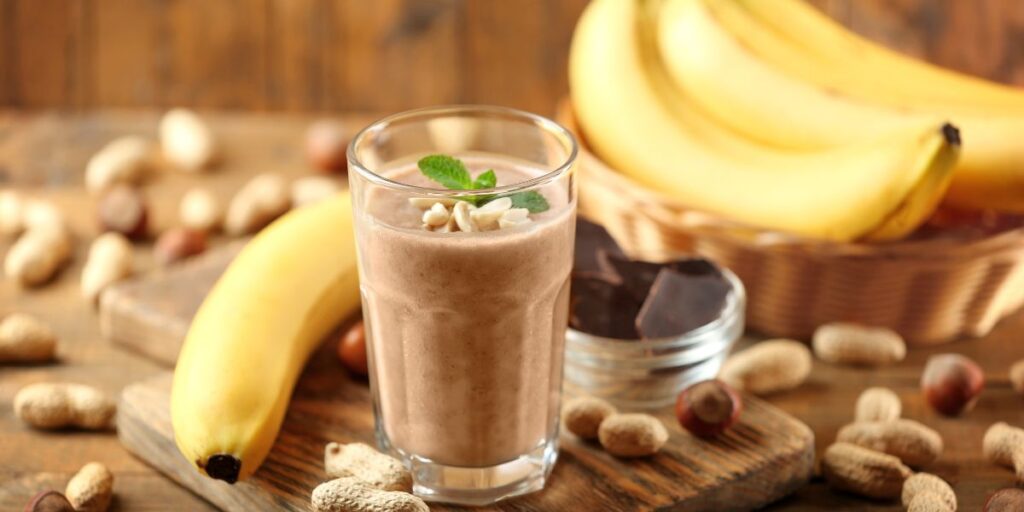 The Banana Peanut Butter Smoothie, despite being one of the simplest high-calorie smoothie recipes, will make your efforts to gain weight much simpler. This calorie-dense beverage can substitute for a meal because it provides your body with 500 calories’ worth of fat, protein, and carbohydrates.

A single banana and peanut butter are added to the whole milk-based liquid basis of the banana peanut butter smoothie to increase its caloric content. 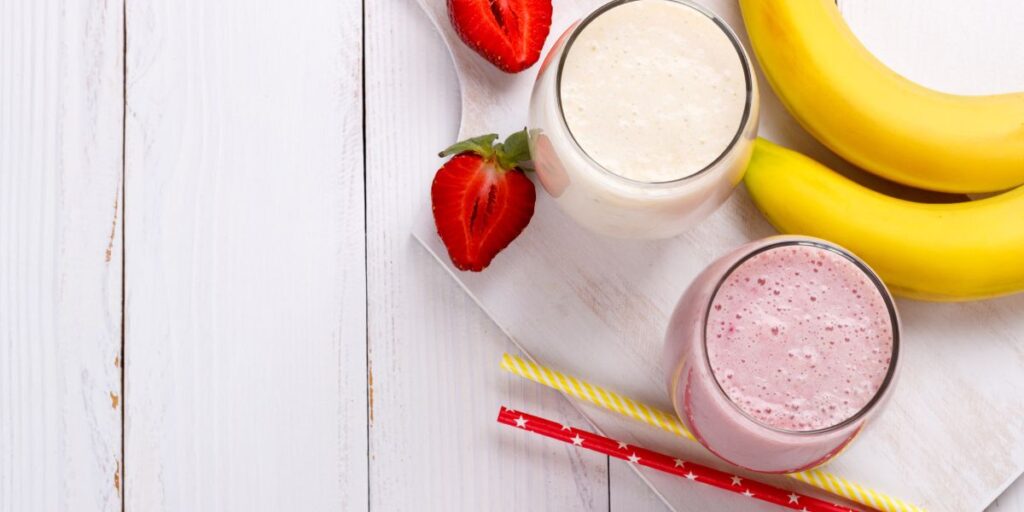 This smoothie is a fantastic source of energy because it is high in protein, fat, and carbohydrates. This mixture includes a liquid base of almond milk, almond butter for thickness and increased healthy fat levels, and solid vitamin-rich components including bananas, strawberries, and fresh spinach.  The protein powder is primarily responsible for the smoothie’s protein content. 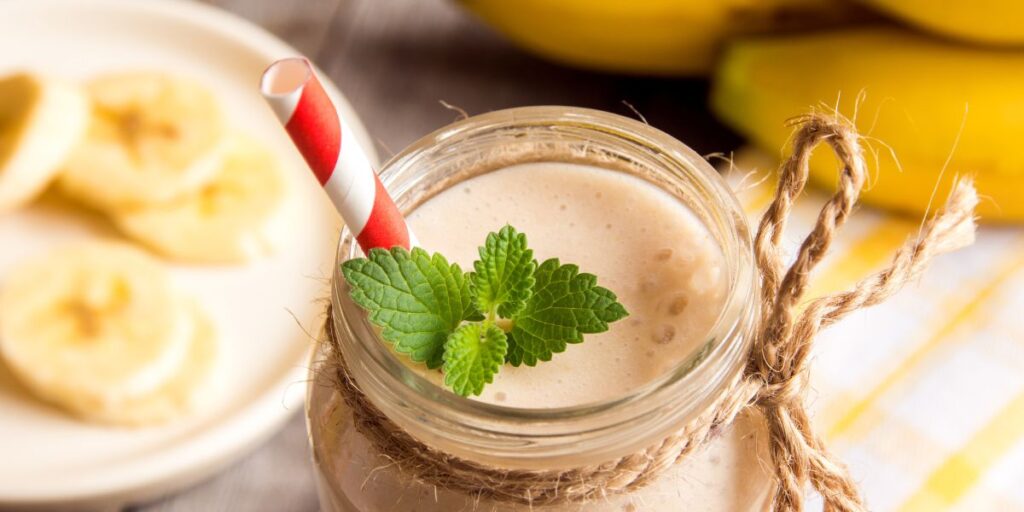 The Mint Chocolate Banana Smoothie is a calorie-dense beverage with a lot of carbs, moderate amounts of protein, and healthy amounts of fat. Whole milk serves as the smoothie’s liquid foundation. Three different types of powdered and solid ingredients must be added in addition to the milk. 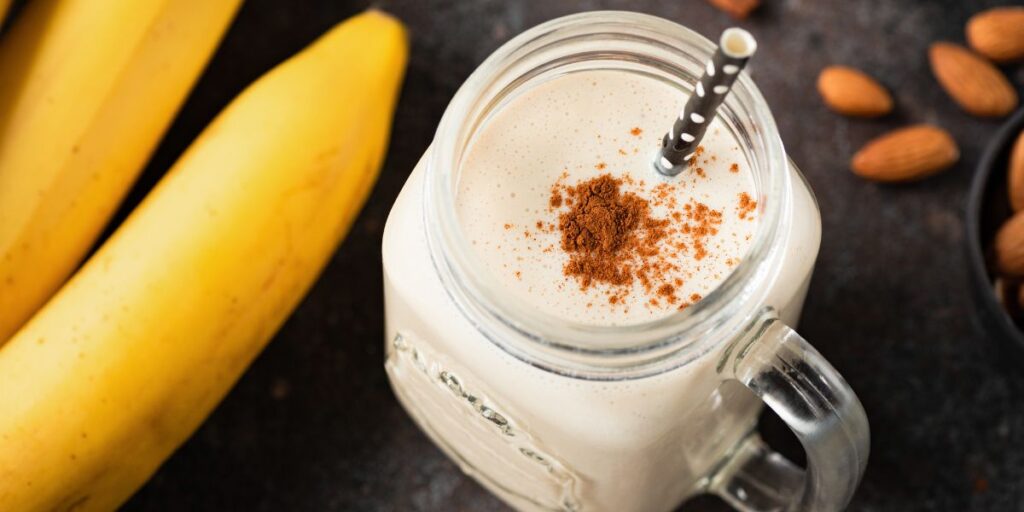 This high-calorie smoothie is particularly effective at providing your body with energy and promoting weight gain because it is carb-rich.

The Chocolate Almond Butter Smoothie is made with an almond milk liquid base and two frozen bananas that serve as the primary source of the smoothie’s carbohydrates.

It also contains almond butter, which raises the smoothie’s fat content, and kale leaves, which provide the dairy-free beverage with vitamins and minerals. 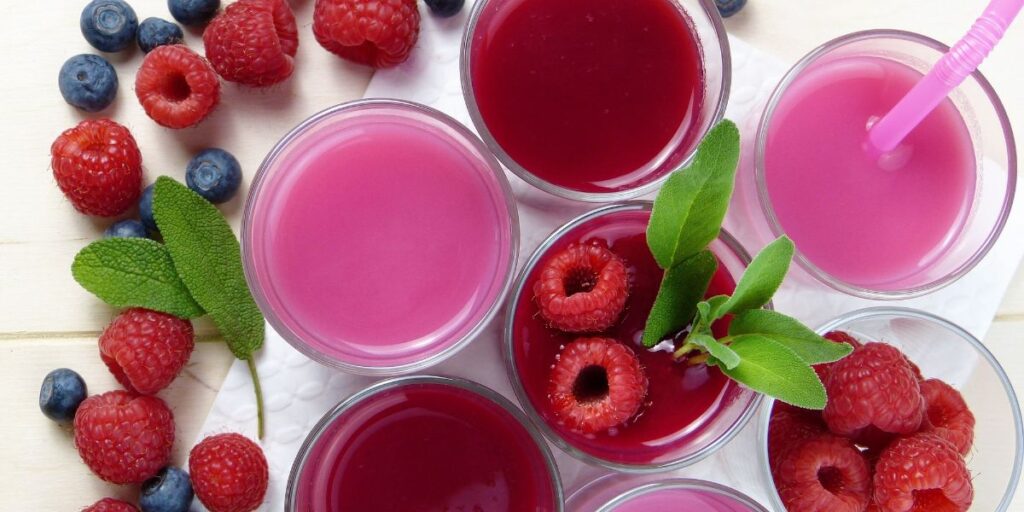 This calorie-dense smoothie will be delicious if you like berries. The Super Berry Smoothie’s nutrient profile, which is primarily made up of carbohydrates but also includes respectable amounts of protein and fat, will assist you in gaining weight.

The blend of seeds raises the intake of fat while the raspberries, blueberries, and goji berries help to magnify the quantity of carbohydrates in the beverage. Along with the dairy, the seeds add to the smoothie’s protein content. 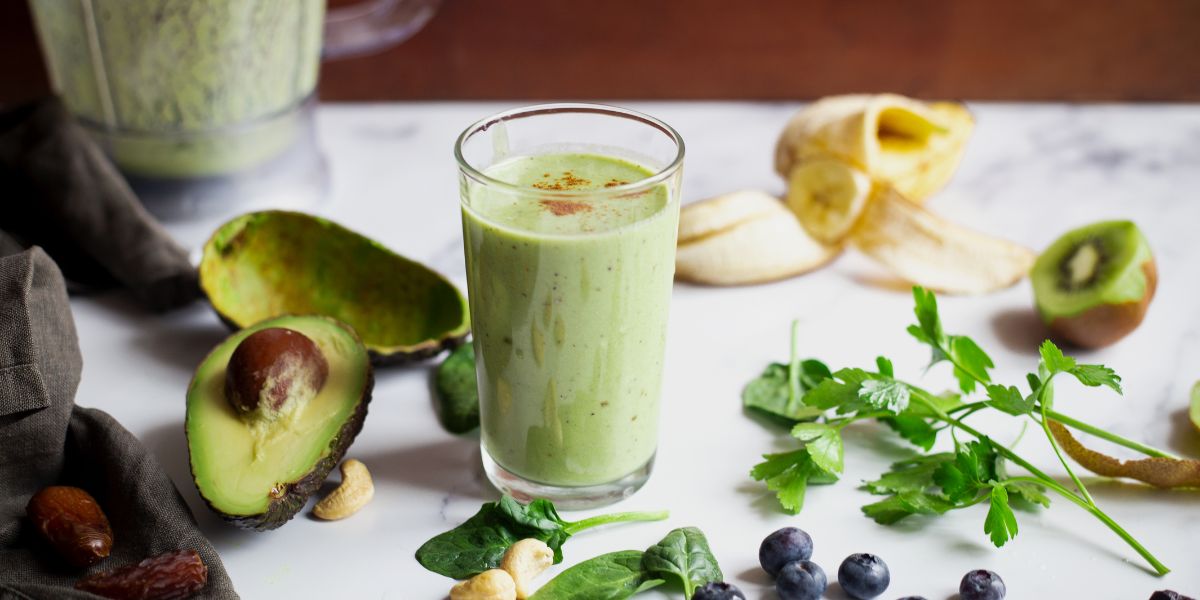 The Green Protein Smoothie is a high-calorie, vegan beverage with a lot of protein, as its name would imply. Additionally, this smoothie is particularly helpful if you are on a low-fat diet because it mostly provides protein and carbohydrates.

The fruits, vegetables, and coconut water that make up the Green Protein Smoothie’s base give the drink its distinctive green hue. Other ingredients include apples, bananas, avocados, and celery. For an enhancement in protein and flavor, mix in additional protein powder and lime juice.

High-calorie smoothies are one of the best food options when trying to gain weight or build muscle because of all the health benefits they give your body.

“People tend to balance out their eating patterns automatically as they start to understand how many calories they are consuming in their smoothies.”

Weight gain Smoothies are a tasty and frequently healthy supplement to your diet; it just might be a good idea to spread out their consumption or balance it out with your other meals.

You will now be able to effortlessly achieve your daily calorie objectives while growing closer to your ideal body shape now that you know how to make a high-calorie smoothie.