What is Nutritional Yeast?

Nutritional yeast is an immobilized yeast, often called Nooch or hippy dust. It looks like red pepper flakes, powdered parmesan cheese. It is formulated with the strain of Saccharomyces cerevisiae, though brewer’s yeast is also derived from the same species. Both of them are loaded with plenty of macro and micronutrients.

Both are inexpensive sugar industry byproducts that give lots of glucose to yeast for growth & production. Because of its cheesy flavor, it can be used in any continental dish. It goes well in soups and pasta sauces. Salad dressings can also be made with it.

It is of two types:- 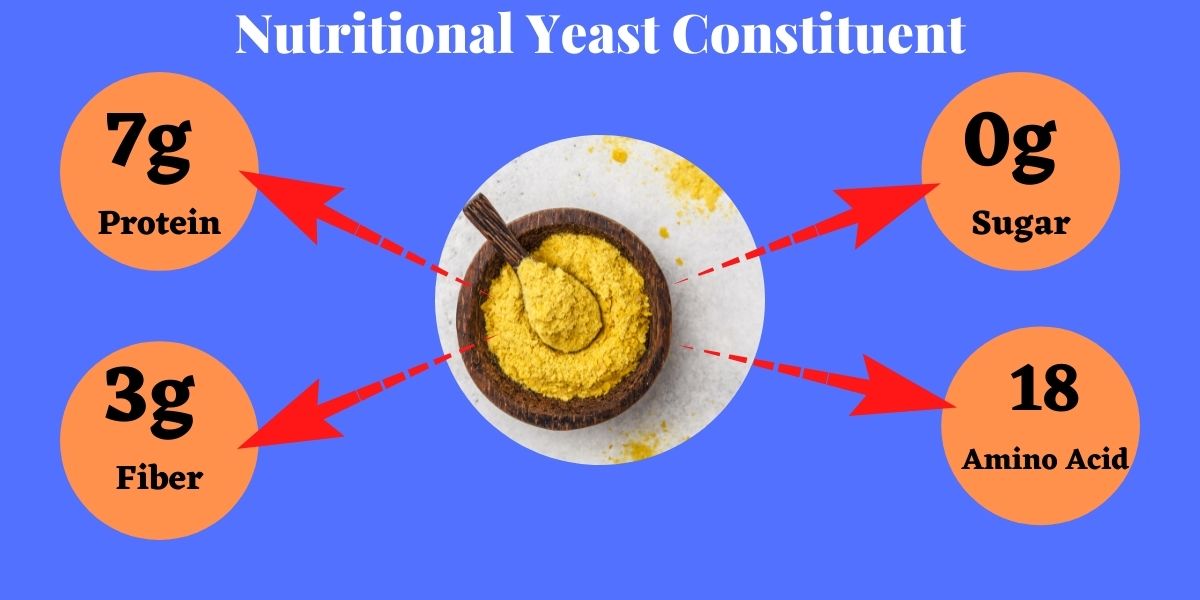 It is also abundant in protein, fiber, and vitamin B complex. These nutritional benefits are limited to products made with basic glucose media. However, most nutritional yeast supplements consist of artificial nutrients to their growth substrate.

It also contains high levels of antioxidant properties, such as glutathione and selenomethionine, that can also aid the body to minimize inflammatory responses, arthritis, and heavy metal and carcinogen elimination.

B12, a crucial vitamin for immunity, blood capillaries, energy metabolism, and the formation of red blood cells, is found in those which are grown in a synthetic nutrient medium.

Depending on how it is cultivated, its nutritive content may vary. It can be a great source of numerous micronutrients, including copper, zinc, potassium, magnesium, and chromium, depending on the way of culture/cultivation.

Is Nutritional Yeast Good for You?

Yes, it is good for us, as it has numerous nutritional value, but it should be consumed in a limited amount, proper moderation in the diet is essential. Individuals who are allergic to yeast and have folic acid metabolic ailments should avoid consuming it. Vitamins and minerals are abundant in them. It is also known as a complete protein source because it has all amino acids in it which makes it similar to protein which is found in non-veg items.

Complete proteins are essential nutrients that help with tissue repair and nutrition absorption. They may also help to avoid muscular wasting. Along with the property of complete proteins, it is also rich in vitamin B complex especially thiamine, riboflavin, niacin, vitamin B6, and vitamin B12 and it is also a great source of trace elements like zinc, selenium, manganese, and molybdenum which play a vital role in the human body like proper maintenance of metabolism, human gene regulation, etc.

1. Aids in Vitamin B12 Deficiency:- It is a great source of vitamin B12. As it’s a vegan source it is highly recommended for vegans who’re suffering from vitamin B12 deficiency. Vegans who’ll consume fortified nutritional yeast have a lower risk of vitamin deficiency. Consumption of it also aids constipation, loss of appetite, and diarrhea in vegans.

3. Manage Blood Pressure Levels:-It contains tyramine, an amino acid that helps in regulating blood pressure levels. As it contains no sodium but enough flavor, it can be sprinkled on dishes that we normally consume like boiled eggs, protein salad, broccoli soups, when we sprinkle it on such dishes it not only adds flavors but also increases the nutritional value.

4. Acts as an Anti-bacterial agent:- It enhances the potential of immunoglobulin which helps our body to fight against harmful bacteria. It pacifies candida symptoms. Consumption of it prevents pathogenic microorganisms from adhering to the gut lining.

5. It is a Completely Gluten-free Source:- Individuals who are gluten intolerant can easily consume nutritional yeast as it is gluten-free (gluten is a protein found in wheat, rye & barley). If you have other food intolerances, you’ll be glad to hear that it is also soy and dairy-free. As a consequence, it can be a valuable supplement for persons with food allergies or sensitivities.

6. Manage Blood Glucose Level:- chromium present in nutritional yeast helps in the regulation of blood sugar levels. It has a low glycemic index profile. Diabetes and cardiovascular disease risk are reduced when blood sugar and cholesterol levels are under control.

7. Secures Liver:- It is also high in selenium, which is necessary for the liver’s protection against free radicals. Consuming selenium-rich nutritional yeast is very beneficial for preventing liver cancer. It is good for fatty liver.

8. Rich in Amino Acids:- It is a great source of high-quality protein as it contains all of the essential amino acids like isoleucine, leucine, lysine, methionine, tryptophan, and valine, etc. 2 tbsps of nutritional yeast contains 8 g of high quality – protein! It’s also high in lysine, which means vegetarians and vegans will have potential health benefits from adding it to their diet daily. Complete proteins are essential nutrients that help with tissue regeneration and proper micro-macro nutrient assimilation.

9. Maintains Gut Health:- It is a good probiotic that enhances gut function and defends the gut from dangerous bacterial infection when ingested daily. Escherichia coli, Vibrio cholera, and Salmonella have all been shown to be resistant to it. This is because of its pH, the elevated concentration of ethanol produced, and the secretion of antimicrobial chemicals that aid in the removal of microorganisms. It also helps in the reduction of inflammation and pain in the intestine.

10. Improves Skin Health:- It is used at a large scale in cosmetics and skincare products. It keeps skin moisture and brightens the face. It is also present in the ointments recommended for acne. It promotes rejuvenation and decreases aging symptoms like fine lines, spots, dark patches, and blemishes.

11. It aids in the treatment of Chronic Fatigue Syndrome:- Vitamins and minerals, such as vitamin B complex, vitamin K, and essential amino acids, are critical in the prevention and treatment of fatigue syndrome. It enhances endurance and recovery rate. It has been proved that sportspersons who consume nutritional yeast suffer less post-work-out fatigues due to the presence of B-glucans.

12. Support Immune System– It is rich in antioxidants which help in maintaining immunity. As it also contains a good amount of B- glucans that helps in better cell signaling. It also promotes the growth of lymphocytes (white blood cells).

13. Mineral-Rich:- Iron, zinc, potassium, magnesium, and selenium are among the minerals found in them. Some of those minerals are trace minerals, which the body doesn’t require in large quantities but can’t produce on its own. They’re all necessary for electrolyte balance, cell growth, wound healing, etc.

14. Fiber-Rich:– It is also rich in fiber which helps in regulating blood glucose levels. It has 4gm fiber in 2 tablespoon yeast. The fiber in it helps healthy digestion and regulates bowel movements. It also improves congestion, constipation, aids in weight management, and improvement of intestinal health.

15. Good for Nails and Hair Growth– Consumption of it helps in maintaining shiny and strong hair. Our hair needs vitamins and hydration to be healthy which can be easily obtained by the consumption of nutritional yeasts. It also hardens the nail structure which prevents it from layering, breakage, and brittleness of nails.

16. Good Pregnancy Supplement:- It is rich in folic acid. It helps in maintaining a healthy pregnancy as folic acid is essential for the growth of the fetus. It prevents some major birth defects related to CNS (central nervous system- includes the brain and spinal deformities).

As discussed earlier it consists of tyramine which helps in the regulation of blood pressure but people who’ve migraines are not advised to consume tyramine in their meals. It can trigger pain and anxiety.

It should not be consumed by anyone who is allergic to yeast products. Inflammatory bowel illnesses, such as Crohn’s disease  (A kind of inflammatory bowel disease that includes pain in the abdomen, nausea, diarrhea, weight loss, mal-absorption) may be made worse by nutritional yeast.

Consumption in large amounts or more than recommended can cause face flushing due to the presence of niacin in it. In some cases it causes gas formation, bloating and triggers the auto-immune disease.

It is consumed worldwide as it is a vegan source derived from the Saccharomyces cerevisiae. It is similar to brewer’s yeast in context with origin but different in context with activation stage. It is an inactive form of yeast that is loaded with a lot of health benefits like anti-bacterial, immune boosters, a good supplement for pregnancy, promotes healthy hair, skin, and nail maintains gut health, and acts as an instant energy booster. It is rich in fiber, vitamin B, and protein. It is not advisable to consume if you’re suffering from migraines or any digestive tract ailments.

Ans: Yes, it is gluten-free and can be easily consumed and digested by gluten allergic individuals.

2. What is the best way to use Nutritional Yeast?

Ans: We can use it as sprinklers, thickener in soups, and as a cheese flavoring agent.

Ans: Yes, it is good for weight loss as it is rich in fiber & protein content.

4. Who should eat Nutritional Yeast?

Ans: Anybody can consume it until and unless he/she is having an allergic reaction to yeast. But it is highly consumed by vegans. And because of its high nutritional value, it provides potential health benefits to us.

5. What is the best way to eat nutritional yeast?

Ans: Following are some best ways to eat it by including in our meals:-

6. What can replace Nutritional Yeast?

Ans: Some widely used replacers are as follows:

Ans: It has a bit similar taste to the cheese. It tastes savory, nutty, and creamy. It acts as a flavoring agent and great alternatives for sugar, salt, and cheese.

8. What is the healthiest Nutritional Yeast?

Ans: It is available in two forms, the first one is flakes and the second one is powdered form. Flakes sometimes create problems because of their size. On the other hand, powdered form is highly used in the food industry as in the form of sprinklers, etc. But based on brand popularity Bragg nutritional yeast is widely consumed.

Ans: No, as for acid reflux salt is needed in high amounts but nutritional yeast is low in sodium and high in vitamin B complex which doesn’t lead to any negative consequences. But if you’ll feel any burning sensation or kind of suffocation after eating it then you should avoid consuming it.

Ans: Yes, both are different in many ways like in taste, constituents, strains, etc.