What is Fodmap Diet?

FODMAP stands for Fermentable oligosaccharides, disaccharides, monosaccharides, And Polyols. According to the FODMAP theory, eating meals high in fodmaps increases the amount of liquid and gas in the small and large intestines.

Abdominal pain, gas, and bloating are some of the symptoms. It also causes constipation and diarrhea. Fodmaps are found naturally or as additions in some meals.

Fructose (found in fruits and vegetables), fructans (found in some vegetables and grains), lactose (dairy), galactan (legumes), and polyols are some of them (artificial sweeteners).

According to studies, these foods seem to have a cumulative influence on symptoms. To put it another way, consuming more high Fodmap foods at the same time adds up. This causes symptoms that you wouldn’t have if you only ate one high fodmap diet at a time.

The Fodmap diet is classified into two types:

2. Low fodmap diet:- Dark chocolate, table sugar, maple syrup, and rice malt syrup are all included in a low fodmap diet. The low fodmap diet carries the risk of nutritional deficiency as well as the promotion of disordered eating, which has gotten little consideration.

Fodmap diet & low fodmap diet are considered to be similar as both of them constitute balanced fodmap food items.

How Does a Low Fodmap Diet Help?

Fodmap foods are poorly absorbed, highly osmotic, and fast fermented by GI bacteria, resulting in an increase in water and gas in the GI tract, which causes GI tract distention, bloating discomfort, and flatulence.

Restrict foods high in Fodmaps for 6-8 weeks to check your tolerance for these substances, and then progressively reintroduce meals to identify those that trouble you.

Every four days, reintroduce one item, with a two-week gap between problematic foods. The goal is to determine the level at which you can ingest fodmap containing meals without experiencing unpleasant GI symptoms.

This diet begins with a low fodmap phase that lasts six to eight weeks. The patient will then progressively reintroduce a certain fodmap containing meals under the supervision of a medical expert.

Keeping track of indications and symptoms of gastrointestinal distress during the reintroduction period is critical for identifying dietary offenders.

The low fodmap diet has been demonstrated to alleviate overall IBS symptoms such as abdominal discomfort, bloating, diarrhea, and gas. People with diarrhea-predominant or mixed-type IBS may benefit from a low fodmap diet more than those with digestive problems IBS or other forms of constipation.

According to research, it has been found that even on a gluten-free diet, some celiac disease patients continue to have GI symptoms. A 21-day low fodmap, gluten-free diet improved subjective psychological scores (such as well-being and health perception), cardio-respiratory fitness, abdominal cramps, and fecal consistency to a larger extent than a traditional gluten-free diet alone, with no reduction in nutritional adequacy, according to two randomized controlled trials (RCTs).

Only when compared to a high fodmap group, a small number of studies have demonstrated that short-term low fodmap diets (lasting 1-7 days) can minimize exercise-induced gastrointestinal syndrome.

Working of a Fodmap Diet

2. Reintroduction phase:- Over 8 to 12 weeks, fodmap containing foods are gradually reintroduced into your diet as your IBS symptoms improve. It’s best to introduce fodmap groups like fructose and lactose one at a time, as well as keep a food journal to note what you consume and how you feel.

When screening for Oligosaccharides (the ‘O’ in FODMAPs), for example, the rest of your diet should be free of the other fodmap categories. If you take this strategy, you’ll be able to see which fodmap groups you have dietary intolerances to; otherwise, it’ll be impossible to figure out what’s causing your IBS symptoms.

3. Maintenance phase:- Meals that aggravate IBS symptoms are restricted or avoided, while fodmap foods that do not irritate the GI tract are consumed.

You may now start building your diet and long-term approach now that you have all of that food data and have identified the fodmap categories that trigger your IBS symptoms.

You’re aware of your main triggers and the foods you can tolerate. This will allow you to gradually reintroduce select high fodmap items into your diet, increasing nutritional variety while reducing gastrointestinal discomfort.

Foods that were considered tolerable during the reintroduction phase of the low fodmap diet are gradually brought back into the diet during this phase. The low fodmap elimination diet’s ultimate goal is to allow you to eat as much variety as possible while still maintaining decent symptom control.

Let’s break down the acronym Fodmap:

1. Fermentable:- This is the process in which our gut bacteria eat fodmaps and break them down into gas (hydrogen, methane, and carbon dioxide).

2. Oligo-Saccharides:- When you disintegrate the fodmap group into its subgroups, fructans, and galactans, it’s not as terrifying. Onion, garlic, wheat, rye, barley, and dried fruit all contain fructans (fructo-oligosaccharides or FOS). Galactans (galacto-oligosaccharides, or GOS) can be found in a variety of foods, including silken tofu, pistachios, cashews, beans, and lentils.

3. Di-Saccharides:- Lactose, which can be found in foods made from cow, sheep, or goat milk, is the only disaccharide to be concerned about. Lactose is made up of two sugar units that must be ‘unzipped’ by an enzyme called lactase before it can be absorbed by our bodies.

If you don’t have enough lactase enzymes in your gut, you’ll have a hard time processing high lactose foods, which may likely cause symptoms. Lactose is a sugar that can be found in milk, yogurt, and soft cheese. The good news is that low FODMAP diets can include lactose-free milk or yogurt, hard cheeses, and butter.

4. Mono-Saccharides:- This is merely fructose that has accumulated in the presence of too much glucose. To prevent fructose from being malabsorbed, our bodies require equal amounts of glucose. This means that on the low fodmap diet, we only worry about foods like apples, pears, mango, honey, asparagus, and high fructose corn syrup that contain too much fructose. Excess fructose is malabsorbed in up to 30% to 40% of healthy people and those with IBS.

5. And Polyols:- Polyols are sugar alcohols that do not make you inebriated. They can be found in a variety of fruits and vegetables, including apples, pears, stone fruit, and lychee (mushrooms, cauliflower, sweet potato). They’re also man-made and employed in products like protein powders, chewing gum, and diabetic sweets as low-calorie artificial sweeteners. Polyols are only half absorbed in our small intestines, and the remaining polyols are fermented by our gut flora in the large intestine, producing problems for certain people.

What can I Eat on a Fodmap Diet

Reduce Your Consumption Of These Foods 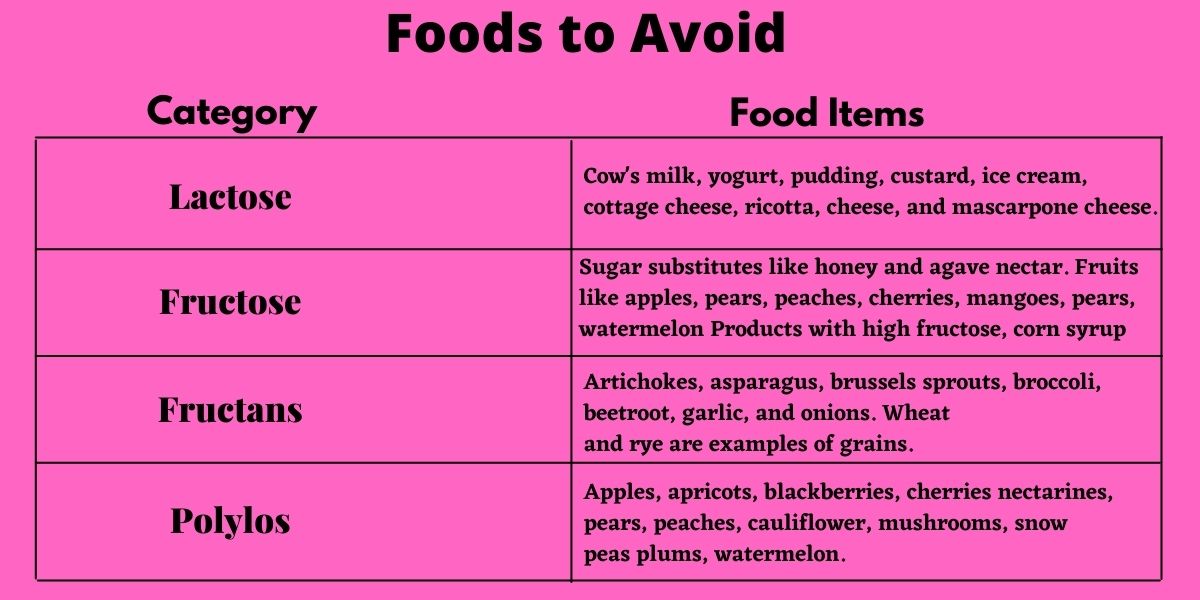 Lactose: Cow’s milk, yogurt, pudding, custard, ice cream, cottage cheese, ricotta cheese, and mascarpone cheese are all examples of dairy products that can increase the lactose level in the body.

Fructans: Artichokes, asparagus, Brussels sprouts, broccoli, beetroot, garlic, and onions are examples of vegetables that are not recommended. Wheat and rye are examples of grains. & Fiber supplements, such as inulin are also not advised to consume.

Polyols: Apples, apricots, blackberries, cherries, nectarines, pears, peaches, plums, and watermelon are examples of fruits that are advised to avoid.

Cauliflower, mushrooms, and snow peas are a few vegetables that should not be consumed.

Sweeteners found in sugar-free gum and mints, as well as cough medications and drops, including sorbitol, mannitol, xylitol, maltitol, and isomalt have a high rejection rate in the fodmap diet.

Who Should Try Fodmap Diet?

For those with IBS[irritable bowel syndrome] and SIBO[Small Intestinal Bacterial Overgrowth], a low fodmap diet is part of their treatment plan. According to studies, it can help people with up to 86 percent of their symptoms.

Because the diet can be difficult during the first, most restrictive phase, working with a doctor or dietitian can verify you’re following the plan correctly — which is critical to success — and eating properly. “Anyone who is underweight should not attempt this on their own,” Veloso cautions.

“The low fodmap diet isn’t designed to help you lose weight, but it can help you do so because it removes so many things.” Losing further weight can be risky for someone who is already at a dangerously low weight.”

Is Gluten an issue while following a Low Fodmap Diet?

This is a topic that is frequently misunderstood. Fodmaps are carbohydrates, but gluten is a protein. Although gluten is not needed to be avoided, gluten-free goods are frequently suggested while on the diet. Because gluten-containing grains like wheat, rye, and barley also contain oligosaccharides, eating gluten-free helps you avoid these fodmap sources.

The idea is to keep oligosaccharides under control rather than gluten. Wheat can be low fodmap in small doses and should not be a concern unless you also have celiac disease. Gluten-free items aren’t always fodmap friendly because they can include hidden fodmaps.

Risks and Side Effects of Fodmap Diet

The Low fodmap diet is not like other well-known FAD diets for weight loss or bodybuilding, such as Paleo, or GM. Long-term compliance to a low fodmap diet is not advised because it may be nutritionally deficient and appears to alter the microbiome in possibly detrimental ways.

Individuals with inflammatory bowel disease (IBD) are already at risk of poor health, thus the low fodmap diet may put them in danger. The low fodmap diet’s restrictive features may worsen an eating disorder. The Irritable Bowel Syndrome diet is only for people who have been diagnosed with Irritable Bowel Syndrome (IBS). This diet aids in the identification of foods that aggravate IBS symptoms.

At the same time, there are certain drawbacks to this diet:-

To manage and treat IBS symptoms, it is vital to adjust one’s food and lifestyle habits once diagnosed. Elimination Diet, Gluten-Free Diet, Low FAT Diet, Correct Fiber Diet, and the most popular fodmap diet are the five types of diets used to treat IBS.

During the elimination phase of the low fodmap diet, it is often recommended that you limit your intake of alcohol and caffeine. While tiny doses of coffee and most alcoholic beverages are low in FODMAPs, they can irritate the gut and exacerbate IBS symptoms.

Antibiotics can swiftly reduce bacterial overgrowth in the small intestine, while laxatives and low-dose antidepressants can help with irritable bowel syndrome symptoms. The Low fodmap Indian food plan, with the guidance of a skilled nutritionist and dietitian, will help you effortlessly overcome your IBS problem. For greater results, one should make a healthy lifestyle modification in addition to their food.

1. How can I consume enough fiber on a low-FODMAP diet?

Replace foods that are high in fodmap with low fodmap alternatives. Fodmap are present in a wide range of fruits, vegetables, grains, and nuts, making it possible to meet fiber guidelines.

2. What is the time frame for the fodmap diet to be effective?

It takes an average of 2-4 weeks for most fodmap trained dietitians to notice noticeable changes. But, in the end, it is up to you and your body. Some people claim to notice changes within the first few days, while others claim to notice a difference around the 4-week.

3. Does following a low fodmap diet show an anti-inflammatory effect?

“A low fodmap diet may reduce inflammation by limiting fuel for more troublesome bacteria in people who have a lot of bloating, gas, heartburn, or diarrhea.” This has a soothing impact on the gastrointestinal tract and may aid in the reduction of inflammation in other areas, such as joints,”.

4. What are the signs and symptoms of fodmap intolerance?

Fodmap intolerance is a condition in which you have difficulty digesting specific carbohydrates, resulting in discomfort, gas, diarrhea, nausea, and vomiting. Oligosaccharides, disaccharides, monosaccharides, and polyols are the culprit polysaccharides.

5. Is coffee considered a Fodmap?